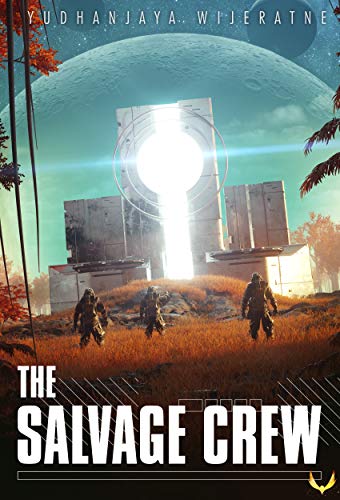 The Salvage Crew by Yudhanjaya Wijeratne was an exciting read. What started as a simple mission to recover ship parts became more and more immersed in problems and complexity.

Filled with adventure and the thrill of exploring an alien world, the story’s main character is an AI. He used to be human and is now an overseer. It’s his responsibility to keep the mission on track. He also enjoys writing poetry.

The crew of three humans is deeply flawed, and they have varying reactions to the adversity they face.  Their human-ness makes the story interesting and kept me turning the pages. There was mystery, exploration, discovery, disaster, pain, and evolution.  I liked the grit and flawed nature of the characters and the universe in which they operate. So many themes and ideas in this novel resonated.

Hope you enjoy it as much as I did. As you’ve probably guessed, I highly recommend adding this book to your library.  I’ll have to see what else this author has to offer as a reading treat.

An AI overseer and a human crew arrive on a distant planet to salvage an ancient UN starship. The overseer is unhappy. The crew, well, they’re certainly no A-team. Not even a C-team on the best of days.

And worse? Urmahon Beta, the planet, is at the ass-end of nowhere. Everybody expects this to be a long, ugly, and thankless job.

Then it all goes disastrously wrong. What they thought was an uninhabited backwater turns out to be anything but empty. Megafauna roam the land, a rival crew with some terrifyingly high-powered gear haunts the dig site, and a secret that will change humanity forever is waiting in the darkness.

Stuck on this unmapped, hostile planet, lacking resources, and with tech built by the cheapest bidder, the salvage crew must engineer their way to payday…and beat Urmahon Beta before it kills them all.