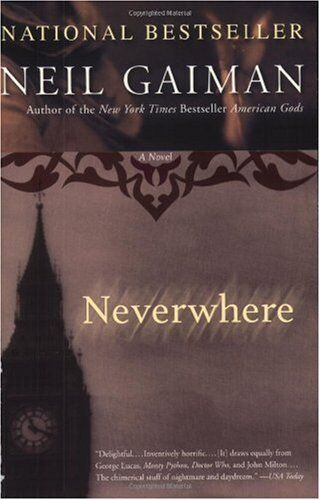 Every time Mr. Croup and Mr. Vandemar came on scene, I cringed. Their character portrayals are so creepy and well done, that I’ve read Neverwhere by Neil Gaiman several times to study his two villains. Plus, the story is dang good.

It is easy to empathize with the main character, Richard, and get lost in Neil’s nightmarish world. I enjoyed this story. A lot. Very imaginative and different.

Neverwhere uses the plot devise of falling into a fantasy world from our world. Other famous examples are Alice in Wonderland, Narnia, Wizard of Oz, Phantom Tollbooth, the Thomas Covenant series and many, many more. I think the idea of doorways to other worlds is intrinsically appealing. Fantasy is escape. Being able to walk into a different reality, well, there’s nothing more escapish than that.

Neverwhere‘s underground world is dark and garish. Yet it is also wonderful and teaches us about the actual world and our natures.

This is definitely a book I recommend reading.

It is the story of Richard Mayhew, a young London businessman with a good heart and an ordinary life, which is changed forever when he discovers a girl bleeding on the sidewalk. He stops to help her—an act of kindness that plunges him into a world he never dreamed existed. Slipping through the cracks of reality, Richard lands in Neverwhere—a London of shadows and darkness, monsters and saints, murderers and angels that exists entirely in a subterranean labyrinth. Neverwhere is home to Door, the mysterious girl Richard helped in the London Above. Here in Neverwhere, Door is a powerful noblewoman who has vowed to find the evil agent of her family’s slaughter and thwart the destruction of this strange underworld kingdom. If Richard is ever to return to his former life and home, he must join Lady Door’s quest to save her world—and may well die trying.

Here’s Your April Fantasy and Science Ficiton Steals and Deals!

Ghosts, Outlaws from 1888, portals in the woods, secret warriors, and Killer Rocks!

You’re never a hero until you are

Available in ebook at all retailers

*A junction erupts between the worlds in Settler, Oregon, a rift from which horrors attack our world. The Rifters defend us.

To trust unquestioningly is the first lesson Daelin Long must learn as the newest Initiate of the Rifters.

Her first day is a disaster. She stands on a deserted street in a town smaller than a city district, courting killer rocks from another world with her ancestor from the Revolutionary War. Normal no longer exists.

While she struggles, Earl Blacke grapples with atoning for his past ill deeds, running far and fast from Settler, Oregon. The Shaman of the Desert promises him redemption, and an old mine puts the possibility of a gold strike in his grasp. His luck has changed for the better, but he can’t have both. 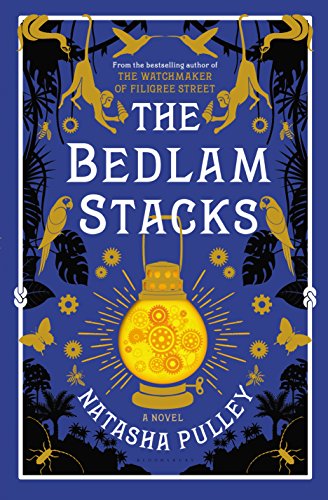 Natasha Pulley is one of my favorite new writers. I fell in love with The Clockmaker of Filigree Street. So, I eagerly purchased this book. The Bedlam Stacks didn’t disappoint.

Pulley revisits the theme of friendship, and the story centers on a trip to Peru. Malaria is keeping British interests in India from thriving. Therefore, it’s imperative to get viable cuttings from the cinchona tree. The  bark is used to treat malaria.

Merrick Tremayne is recruited to make the expedition a success. His family connections and expertise in botany make him the top choice, despite a debilitating injury.

If you enjoyed She by H. Rider Haggard or Erewhon by Samuel Butler, you’ll be delighted with this tale of a grand expedition.

An Adventure to Peru

From a realistic start, the story evolves into the more mystical and magical. The town of Bedlam is quite fantastic: glass cliffs; pollen that is bioluminescent; trees that can float on air; and stone statues that move. It’s a town I’d love to visit. If only it existed!

The Bedlam Stacks is a thoroughly enjoyable escape. I will definitely add Pulley’s third book to my next book run.

In 1859, ex–East India Company smuggler Merrick Tremayne is trapped at home in Cornwall with an injury that almost cost him his leg. When the India Office recruits him for an expedition to fetch quinine–essential for the treatment of malaria–from deep within Peru, he knows it’s a terrible idea; nearly every able-bodied expeditionary who’s made the attempt has died, and he can barely walk. But Merrick is eager to escape the strange events plaguing his family’s crumbling estate, so he sets off, against his better judgment, for the edge of the Amazon.

There he meets Raphael, a priest around whom the villagers spin unsettling stories of impossible disappearances, cursed woods, and living stone. Merrick must separate truth from fairy tale, and gradually he realizes that Raphael is the key to a legacy left by generations of Tremayne explorers before him, one which will prove more valuable than quinine, and far more dangerous.

Load up on these great science fiction and fantasy books!