Oregon is full of volcanic landscapes from different periods in Earth’s history. The Mascall Overlook near John Day, OR, is stunning. 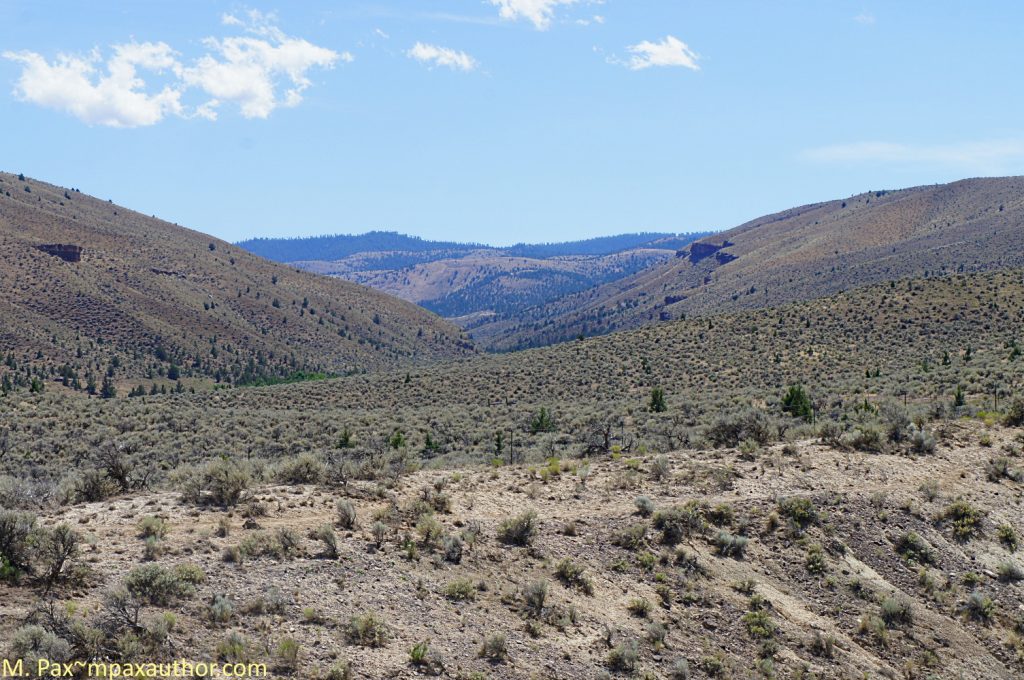 15 million years ago, this was a receding forest being replaced by grasslands. It was populated by horses, camels, and giraffe-deer. Then, as so often happens in Oregon history, a volcano exploded. The upheaval filled the valley with lava and ash and pushed up the plains, creating this unique landscape and capturing the denizens in fossils who weren’t fortunate enough to escape . 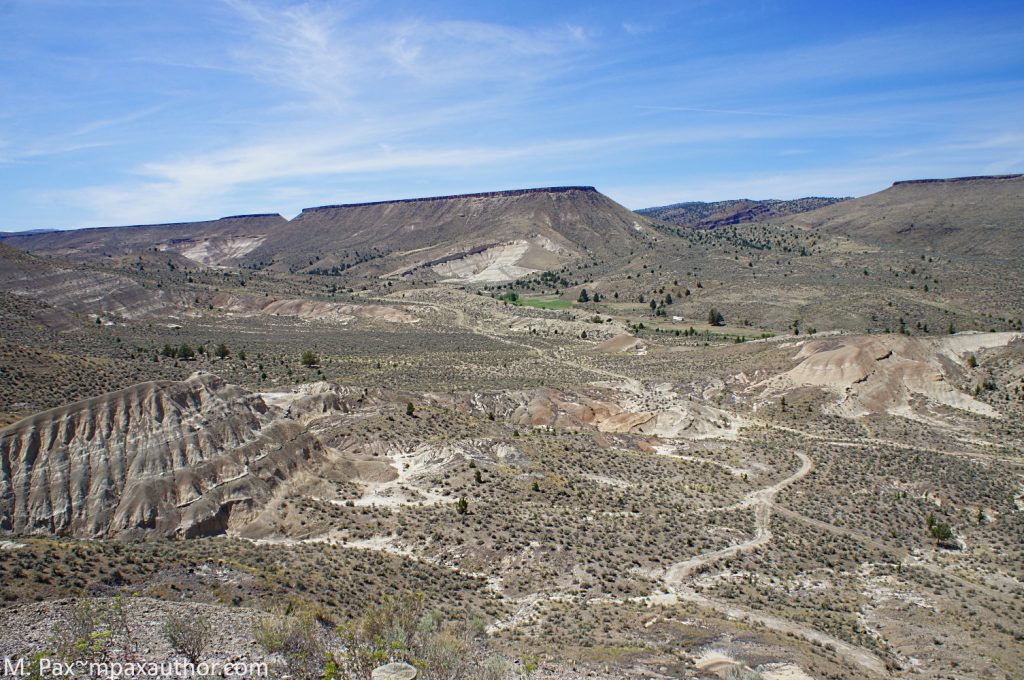 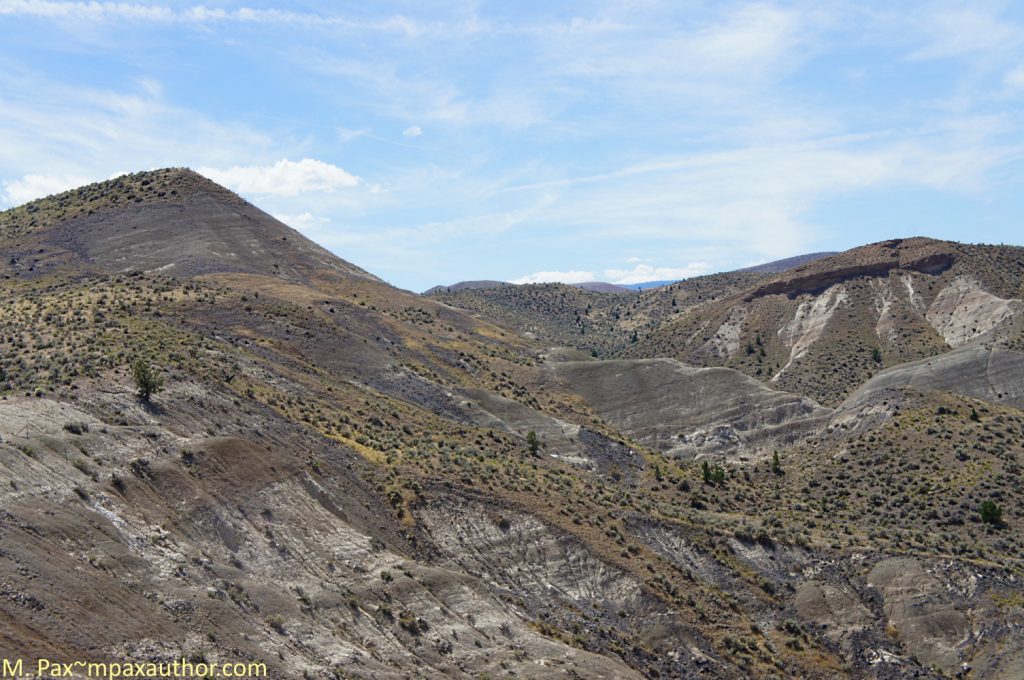 Glad we ran across this gem in our wanderings about the state.

I’m sharing a video I took of a rare event.

The great conjunction of Jupiter and Saturn was at its pinnacle on Monday night (12/21/2020). I was able to get out my trusty telescope, Orson Bradbury, and do some stargazing.

The forecast had us cloudy, but it turned out to be a beautiful day. It was almost 60 and the sky was clear. 60 isn’t normal for these parts in December. However, the wind was roaring. You can probably hear it whistle through the telescope in the video.

This is a once in 400 years event, so I was glad to see it. The video was taken through my 11mm Nagler. That translates into high magnification for those of you not well versed in telescope-speak. To see both in that eyepiece was stunning and something that will never happen again. At least, not while I’m alive.

So, I hope you enjoy the video. It’s not the best, but you get to see something really special. Merry Christmas! 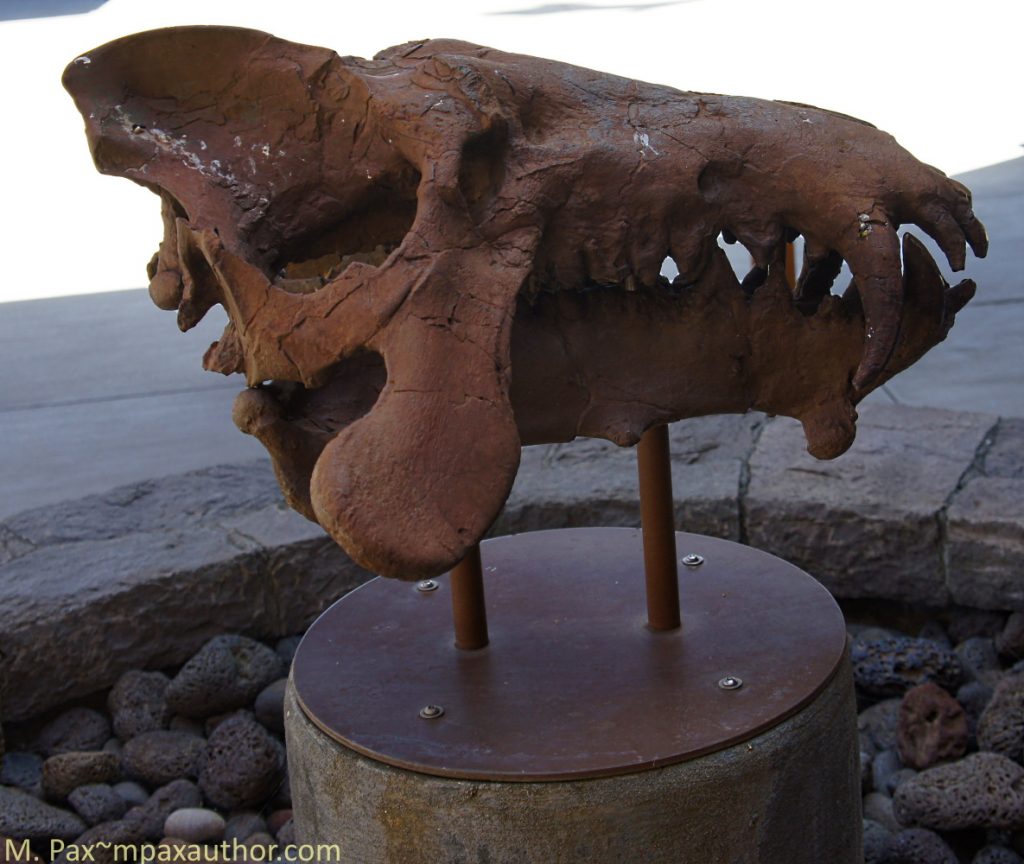 Out in Eastern Oregon is the John Day National Monument, a large parcel of desert land rich with fossils and history predating human existence. It is a beautiful place, and one of the fossils they find in the area are entelodonts, also known as ‘Terminator Pigs.’

I love my dinosaurs, but there were some really interesting and gruesome large mammals that walked the Earth as well. These ‘pigs’ were the size of a buffalo, and look at those teeth! Those do no look friendly.

The extent to which they hunted is widely debated, but those teeth weren’t for eating grass. They lived in the forests and on the plains of North America and Eurasia from the late Eocene to middle Miocene epochs (37.2–15.97 million years ago), existing for about 21.23 million years. Their fossils are quite rare, and I find their existence fascinating to ponder.

Here’s what they probably looked like. I wouldn’t have wanted to meet one. 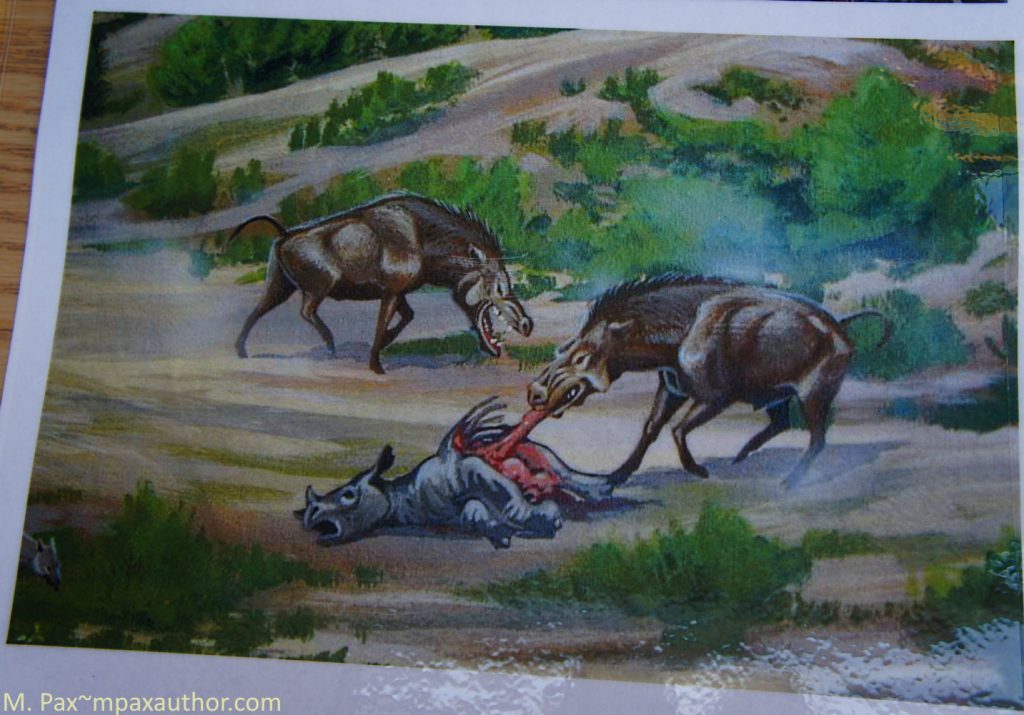 Here’s some pretty fall color to feast your eyes upon… 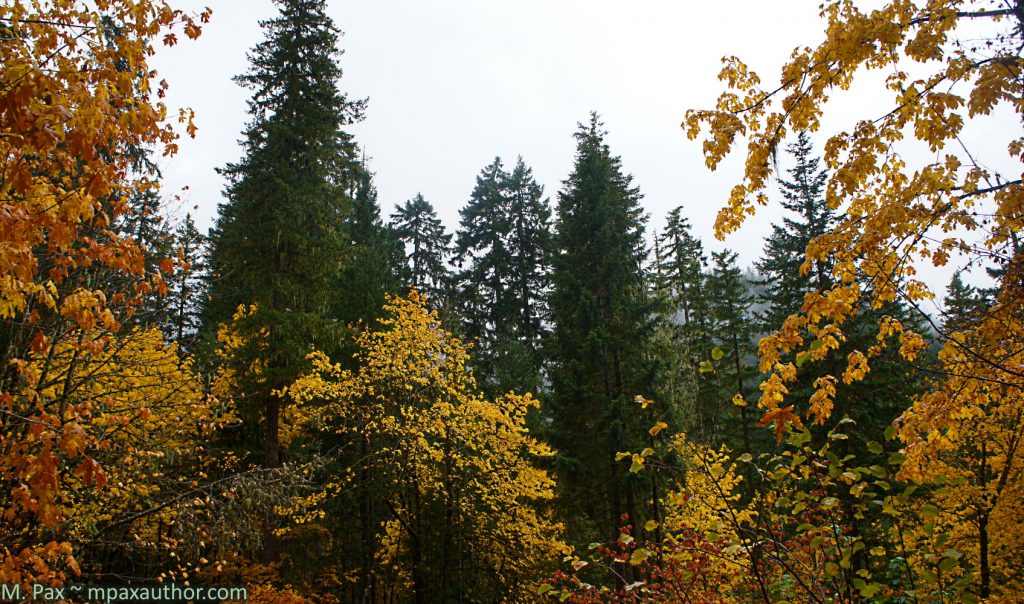 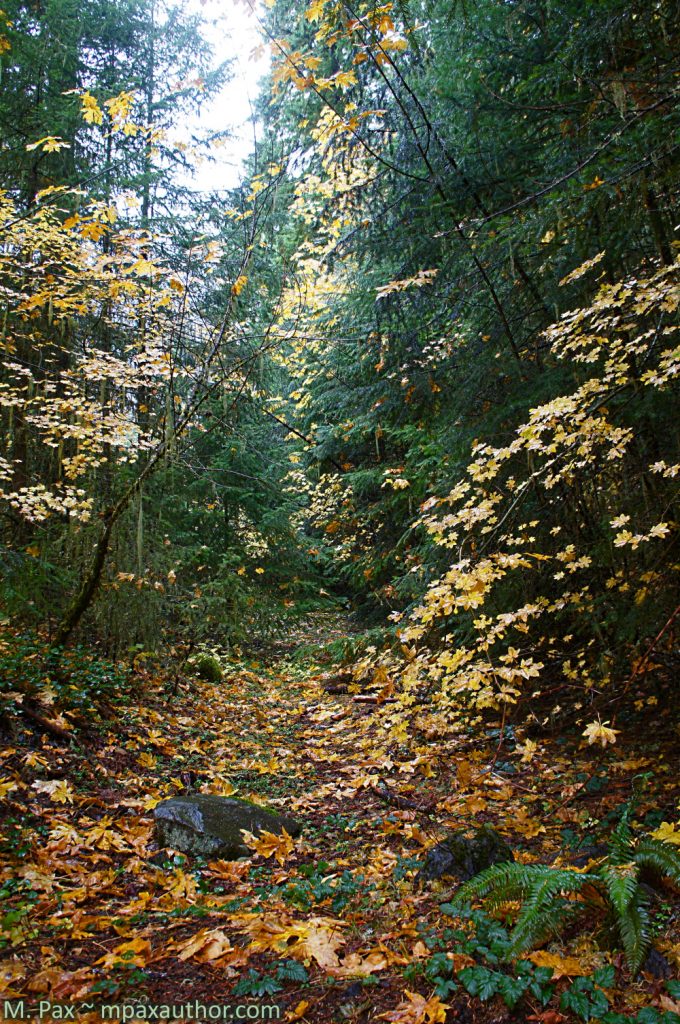 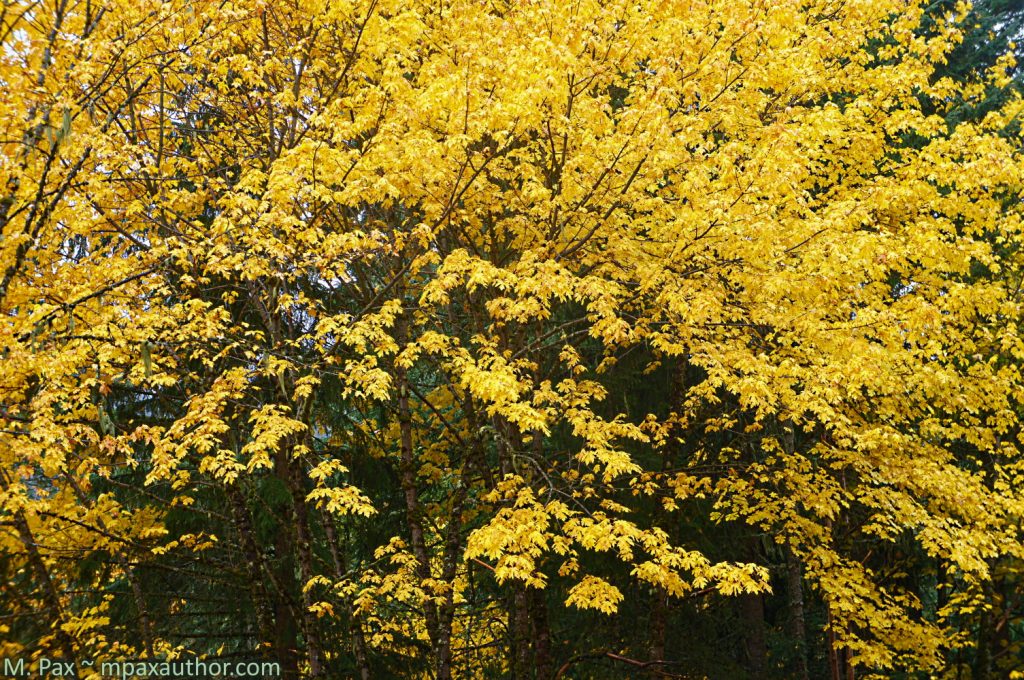 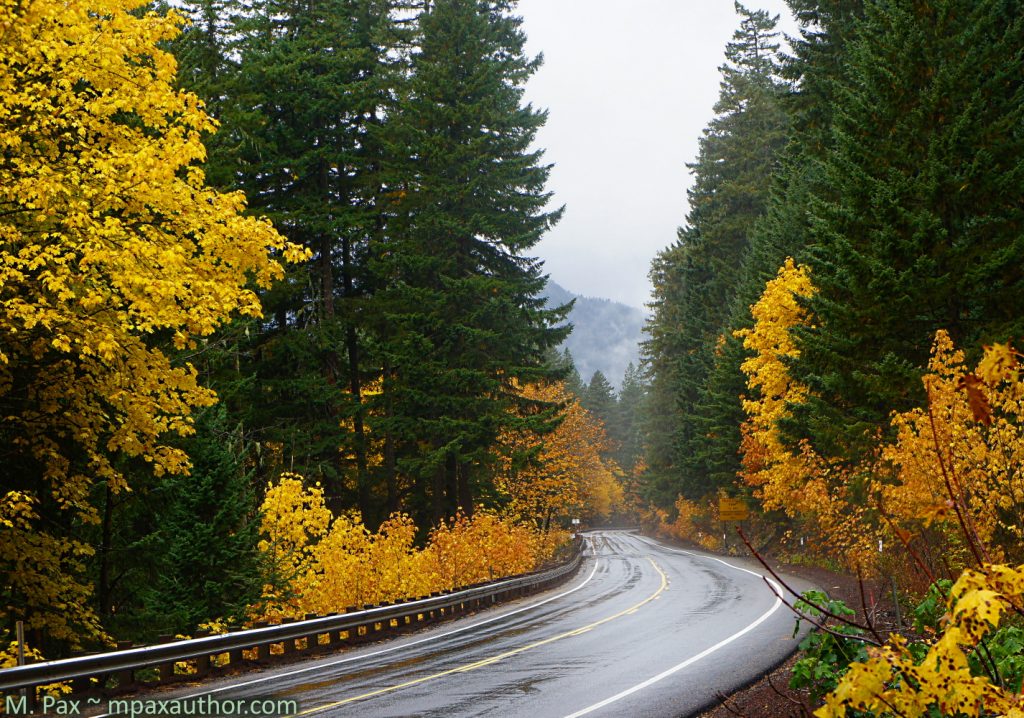 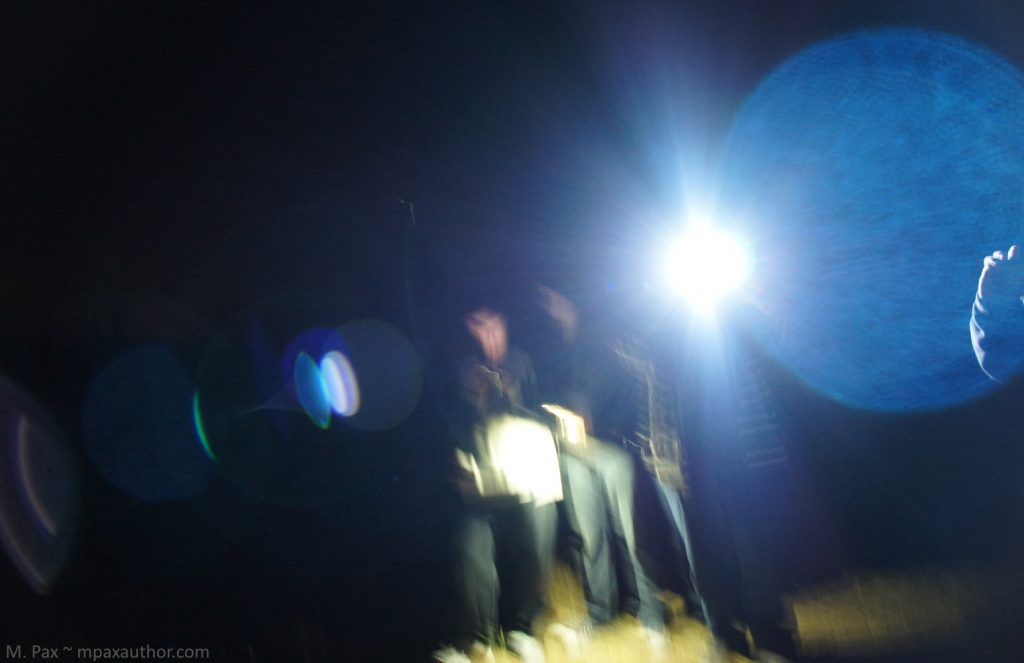 Recently, I went on a ghost hunt at a cemetery near the Haystack Reservoir on Powell Butte (near Madras, Oregon). 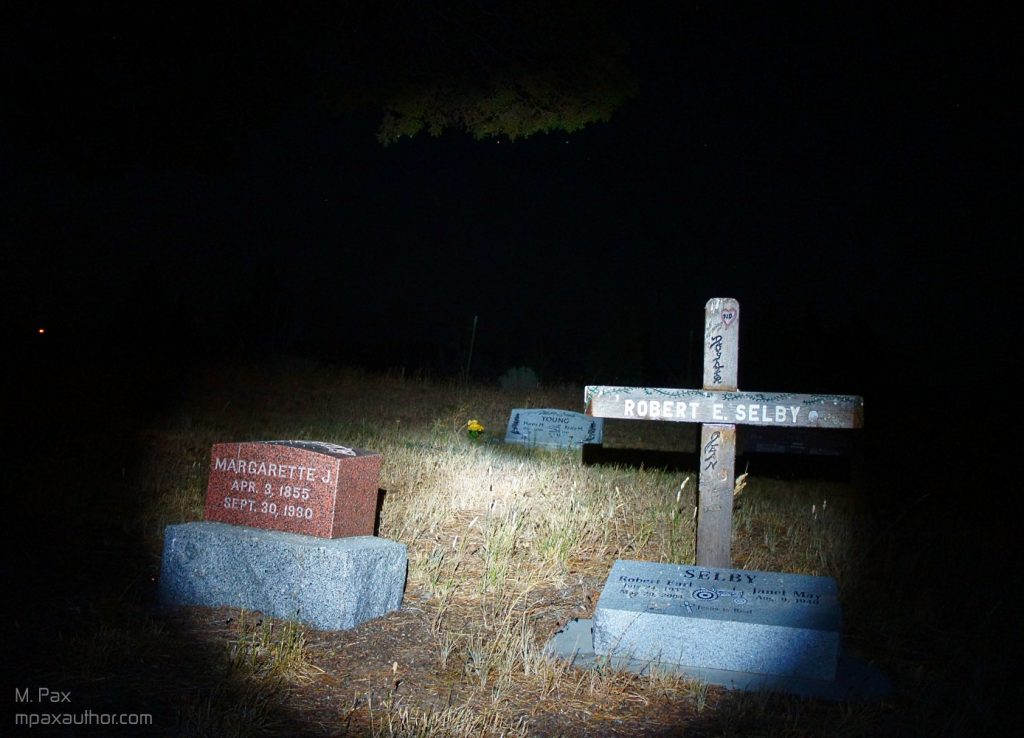 For the most part, it was peaceful and serene, not scary at all, not even the howls of the nearby coyotes.

We strolled around the graves, stopping periodically to ask questions, letting our recorders pick up possible answers. Then we split up into smaller groups. That’s when things became more interesting. Husband Unit, Brian and I went to the back corner by this tree.

If everyone stood still, it was quiet enough to hear the Earth hum. Our planet does make a sound, a constant, soothing buzz.

Then I heard a thump like someone knocking on a gravestone, and very soft pings as if someone tread on tiptoes on the dirt road, disturbing only the smallest of pebbles. I also thought I saw a light move toward me on the ground. But was it? I could easily pass it off as my eyes playing tricks on me. Brian heard a growl. Husband Unit claimed something tugged softly on his shirt. 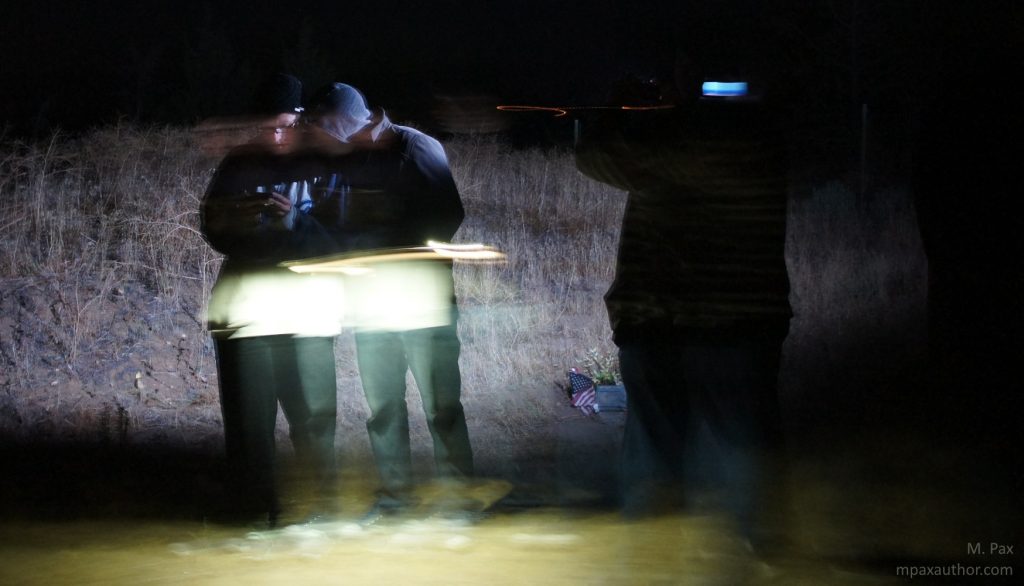 The one gal is a medium and says she was scratched. She did have scratch marks on her shoulder.

At any rate, it was a fun night, and I’ll definitely go out with the crew again.

This is the most interesting photo I captured. Several think it’s two ghosts standing by the graves. I think it’s just the tree. It certainly does look like people standing there, though. What do you think? 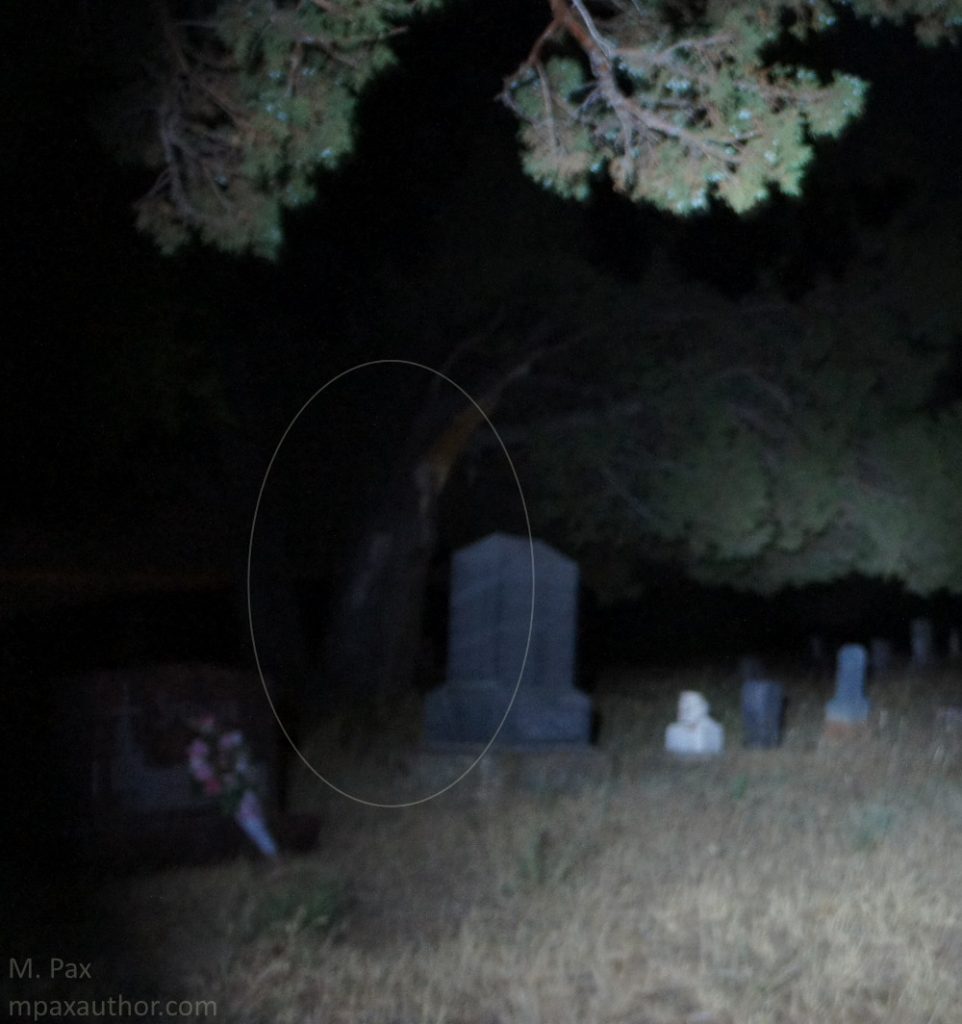 Here’s a photo of the same tree taken a week later by the same camera (sans me – I was home working). The crew repeated their visit to debunk the above photo. 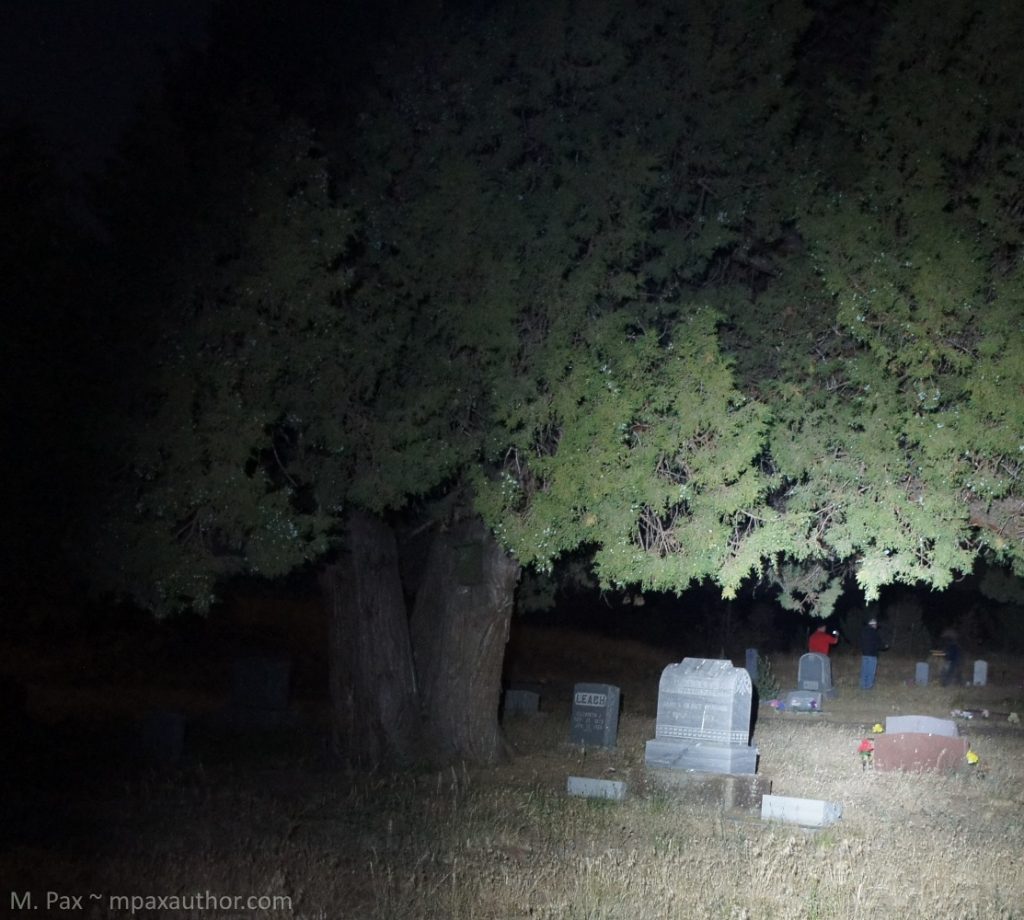 Finding any evidence is exciting. I wonder, are those who left us in a different dimension? Is that why we have such difficulty communicating? If they exist at a higher dimension than we do, we would only catch snippets and not see the whole picture.

Anyway, it fascinates me. Have you ever gone on a ghost hunt? 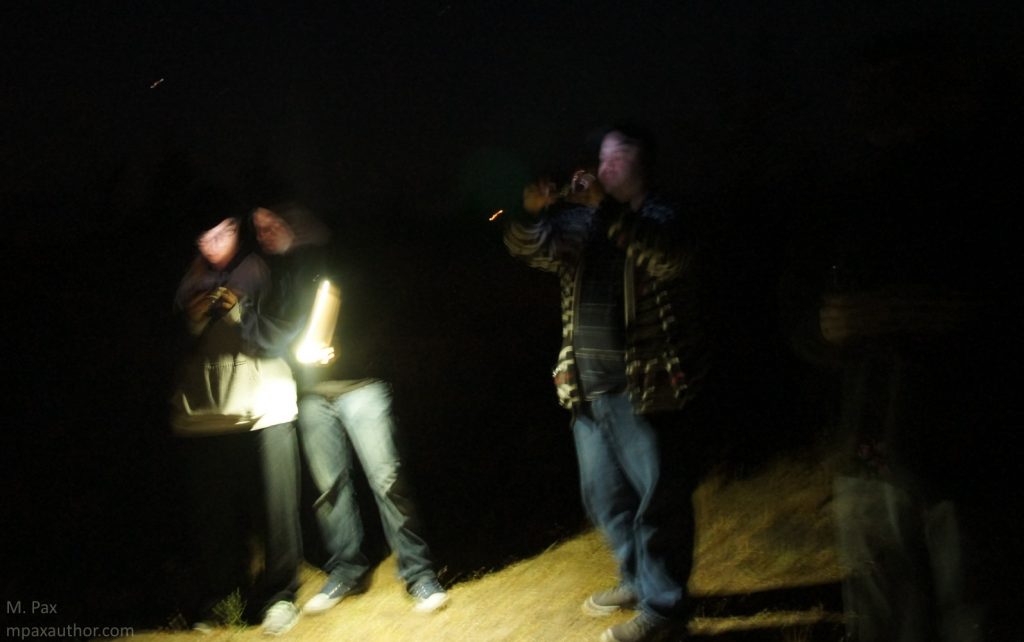